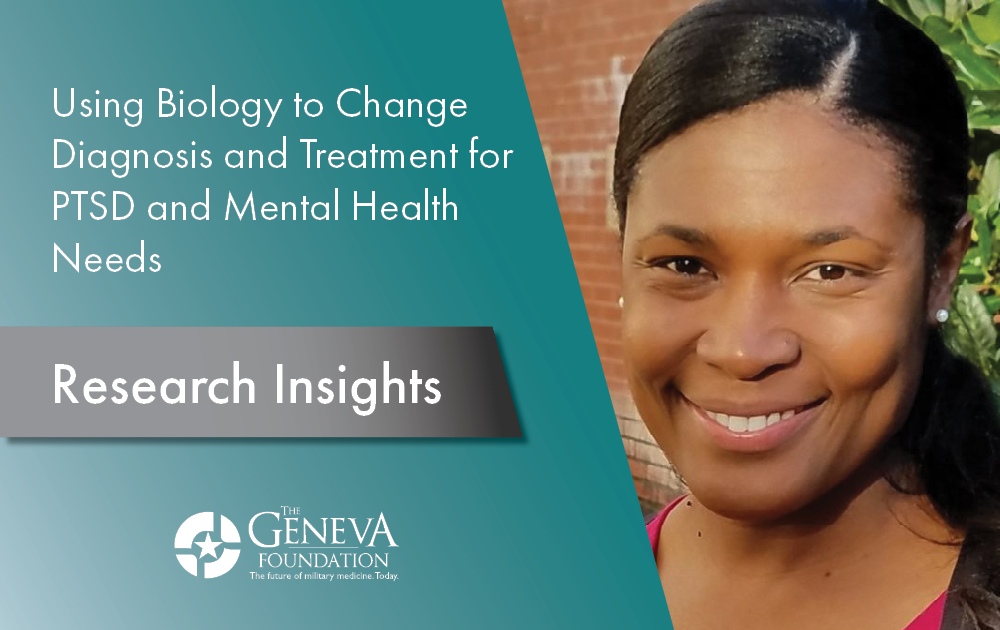 Psychiatric Nurse Practitioner Tamar Rodney, PhD, MSN, RN understands there is a human being behind her work whose outcome is depending on her. The last thing she wants to tell her patients and their families is, “We do not know what the outcome will be.”

Dr. Rodney spent a significant part of her nursing career working in the trauma unit where she was first exposed to the long-term impact of traumatic brain injury (TBI), a leading cause of chronic disability. After landing a research residency with the National Institutes of Health (NIH), she began studying technological advancements in TBI and how they translate into long-term mental health care.

“That changed everything for me,” she said. “I realized we have to fundamentally change the way we diagnose mental health disorders by moving away from the stigmas associated with it and instead, understanding the biology behind it.”

In 2016, Dr. Rodney was awarded the first Geneva-Jonas Scholarship, which helped fund her research in evaluating biomarkers for TBI in veterans. Today, Dr. Rodney is an assistant professor at the Johns Hopkins School of Nursing and a nursing researcher who has expanded her research to include post-traumatic stress disorder (PTSD). Her career goal is to change the way health care professionals approach diagnosis and treatment planning for individuals with mental health needs.

Nursing Research as a Career

Research is important to how clinicians can provide good mental health care.

“I didn’t feel like I was doing enough,” said Dr. Rodney. “Working in clinical care, I remember situations when I was asked by my patient’s family member, ‘What will his life look like?’ I didn’t know how to answer that question.” She added, “With research, if I see a problem, I have a chance to fix it.”

Dr. Rodney describes the Geneva-Jonas Scholarship program as a pivotal factor in the realization that her research passion could be a career. Her PhD research looked at TBI biomarkers in veterans, as more than 185,000 veterans report at least one TBI. She claims she was drawn to working with veterans in the same way she is drawn to improving all of her patients’ outcomes – she wants to understand how to use this information to improve lives.

PTSD is a severe psychiatric disorder that occurs after a psychological traumatic life event and increases individual vulnerability to adverse health outcomes. A PTSD diagnosis is based on self-reported symptoms. Many in the armed services underreport their symptoms because of stigma around mental health conditions.

However, evidence has shown that blood releases biomarkers, or biological identifiers, for PTSD that could help diagnose it, determine the severity of their stress, and predict future hospitalizations.

Dr. Rodney believes we can leverage these recent breakthroughs to inform how mental health is diagnosed and treated.  She believes the key to beating PTSD is acting quickly to identify the syndrome and giving the science time to catch up. “We have to shift a subjective perception to an objective perspective,” said Dr. Rodney. “There is a biological basis for what we experience.”

Often people talk about the effects of TBI or the consequences of PTSD as separate conditions — which they are. But for the person who is living with the dual diagnosis of TBI and PTSD, it can be hard to separate them.

Dr. Rodney is pursuing nursing research topics relating to multiple mental health care issues. She recently published an editorial in the Journal of Advanced Nursing on loneliness in older adults during the COVID-19 pandemic to understand the effects that social isolation has on mental health.

She is also expanding her PTSD biomarker research into TBI by looking at other proteins, including a more comprehensive panel to look for predictive patterns. This research would require a much larger data set, she said. Dr. Rodney recently received a follow-on grant from the Jonas Foundation to allow her to conduct a life course review, furthering her PTSD work in veterans with TBI.

The Impact of the Geneva-Jonas Scholarship

As a Jonas-Geneva Scholar, Dr. Rodney received a $10,000 grant to support her research. While funding for research is critical, she explained that “The support behind the Jonas-Geneva scholarship is more than just financial. The people involved in this partnership genuinely care about my research. Because of that, this scholarship became the gift that keeps on giving.”

Dr. Rodney also pays it forward as a mentor and recently has written about the Spotlight Project, a global collaboration among doctoral nursing students residing in low- and middle-income countries that typically have limited funding and professional resources.

“I want to let people know that it’s ok to pursue a research topic you’re passionate about,” said Dr. Rodney. “Yes, you CAN do it – even if it’s different.”

In 2016, Geneva and Jonas Philanthropies partnered to create a joint scholarship that funds doctoral candidates seeking to improve healthcare for veterans and military personnel. Geneva-Jonas Scholars are among 330 scholars in the Jonas Nursing and Veterans Healthcare Program – all of whom are at the frontlines of medical, emotional, psychological, and rehabilitative care for U.S. veterans. Geneva-Jonas Scholars join an elite group of over 1,250 Jonas Scholars in all 50 states.