Army Lieutenant Colonel (Ret.) Stephen DeLellis, PA-C is a proven leader, mentor, researcher, and driving force in military operational medicine. With a long and decorated career spanning 36 years in uniform and more than 16 combat deployments in six conflicts, he has dedicated his career to caring for America’s elite warriors on far-forward battlefields.

Today, LTC (Ret.) DeLellis is the Executive Director of the Fort Bragg Research Institute, a program of The Geneva Foundation (Geneva), where he continues his important work supporting the operational needs of the warfighter.

In 1983, DeLellis enlisted in the Army as a Private and rose to the rank of Sergeant Major. After successful completion of Infantry AIT and Airborne School, he served as an Infantryman, Team Leader, Squad Leader, and Battalion Assistant Operations Sergeant for the 1st Bn 75th Rangers at Hunter AAF, Georgia. From 1988 to 1998 DeLellis served as a Team Member and Team Leader in the Army’s Special Missions Unit at Fort Bragg, North Carolina.

Upon graduating from Physician Assistant (PA) School, he served as the Battalion PA for 3rd Bn. 325th Infantry, 82nd Airborne Division, and the Battalion PA for 3rd Battalion 3rd  Special Forces Group, From 2004 to 2014 he served as a Squadron PA, Family Medicine Clinic Supervisor, and Deputy Surgeon for the Army’s Special Missions Unit. LTC (Ret.) DeLellis served briefly as the Deputy Surgeon for the XVIII Airborne Corps before moving back to the U.S. Army Special Operations Command (USASOC) as the Chief of Medical Training and the Deputy Command Surgeon.

LTC (Ret.) DeLellis’s medical career has been dedicated to understanding the effects of traumatic brain injury (TBI) in service members and veterans. In conjunction with Womack Army Medical Center and several universities, he helped to develop one of the most comprehensive neurocognitive baseline and post-injury assessment programs in the Department of Defense.

Special Operations Forces (SOF) combat soldiers are frequently exposed to blast and blunt neurotrauma, most often classified as mild traumatic brain injury (mTBI). He has managed the longest continually running TBI surveillance project in the Special Operations community and has co-authored more than 30 articles on mTBI in SOF.

In his current role as Executive Director of FBRI, DeLellis has successfully facilitated the completion of the memorandum of understanding and contracts through the U.S. Army Special Operations Command (USASOC) for the 11th year of continuous funding of the USASOC-UNC TBI Surveillance project. This year’s effort captured $1.7M from the U.S. Army Special Operations Command (USASOCOM) for the next iteration, known as the Assessing and Tracking Tactical Forces  (ATTAC-Forces) initiative. This is the first-ever study of SOF to cover the entire lifespan of a SOF operator from selection into SOF through retirement, in support of the “SOF for life” mantra.

In 2017, during his role as the Deputy Surgeon for USASOC, LTC (Ret.) DeLellis helped build a demonstration for the Army Surgeon General that showed the capability for a non-surgeon to be able to save a life in a remote location using available technology to have a surgeon supervise the procedure, even with an ocean between them. That demo is now a fully developed training package for Army medical personnel that is in use today.

Among other research accomplishments, LTC (Ret.) DeLellis researched methods to prevent acute mountain sickness (AMS), the most common form of altitude illness affecting athletes and adventurists who work or play at elevations greater than 10,000 ft above mean sea level.  AMS also affects SOF who frequently conduct expeditions in these high altitudes. His research tested a prophylaxis as successful prevention for AMS.

Among his many military awards and decorations, LTC (Ret.) DeLellis was recognized for his TBI work as an Army Medical Specialist Corps’ Iron Major in 2012, inducted into the Order of Military Merit in 2018, and was the Army recipient of the Henry M. Jackson Foundation’s Hero of Military Medicine award in 2019. 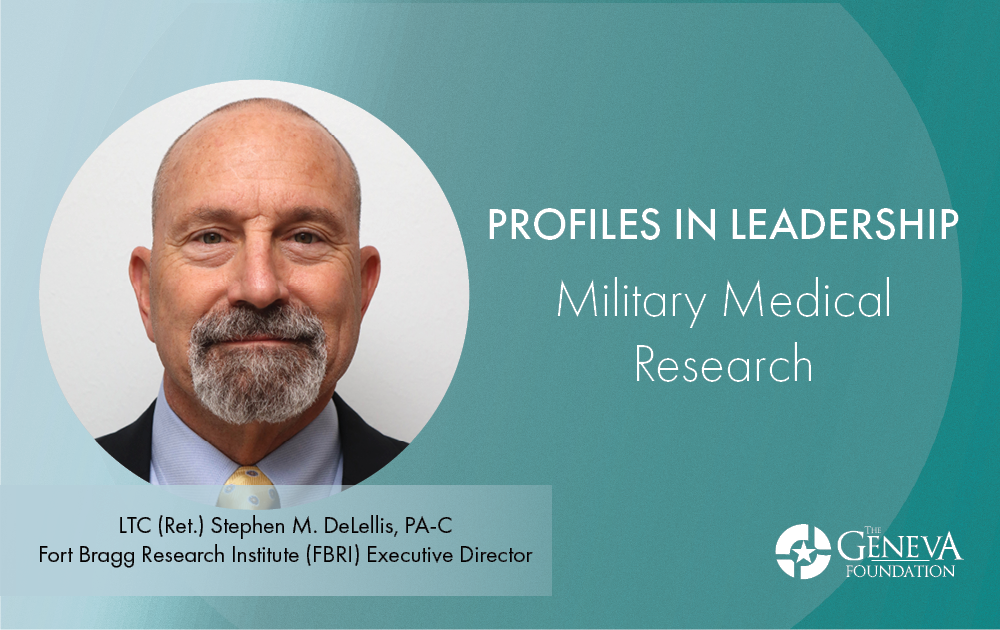 LTC (Ret) DeLellis has dedicated his career to caring for America’s elite warriors on far-forward battlefields. Today, he serves as the Executive Director for the Fort Bragg Research Institute (FBRI), a program of The Geneva Foundation.