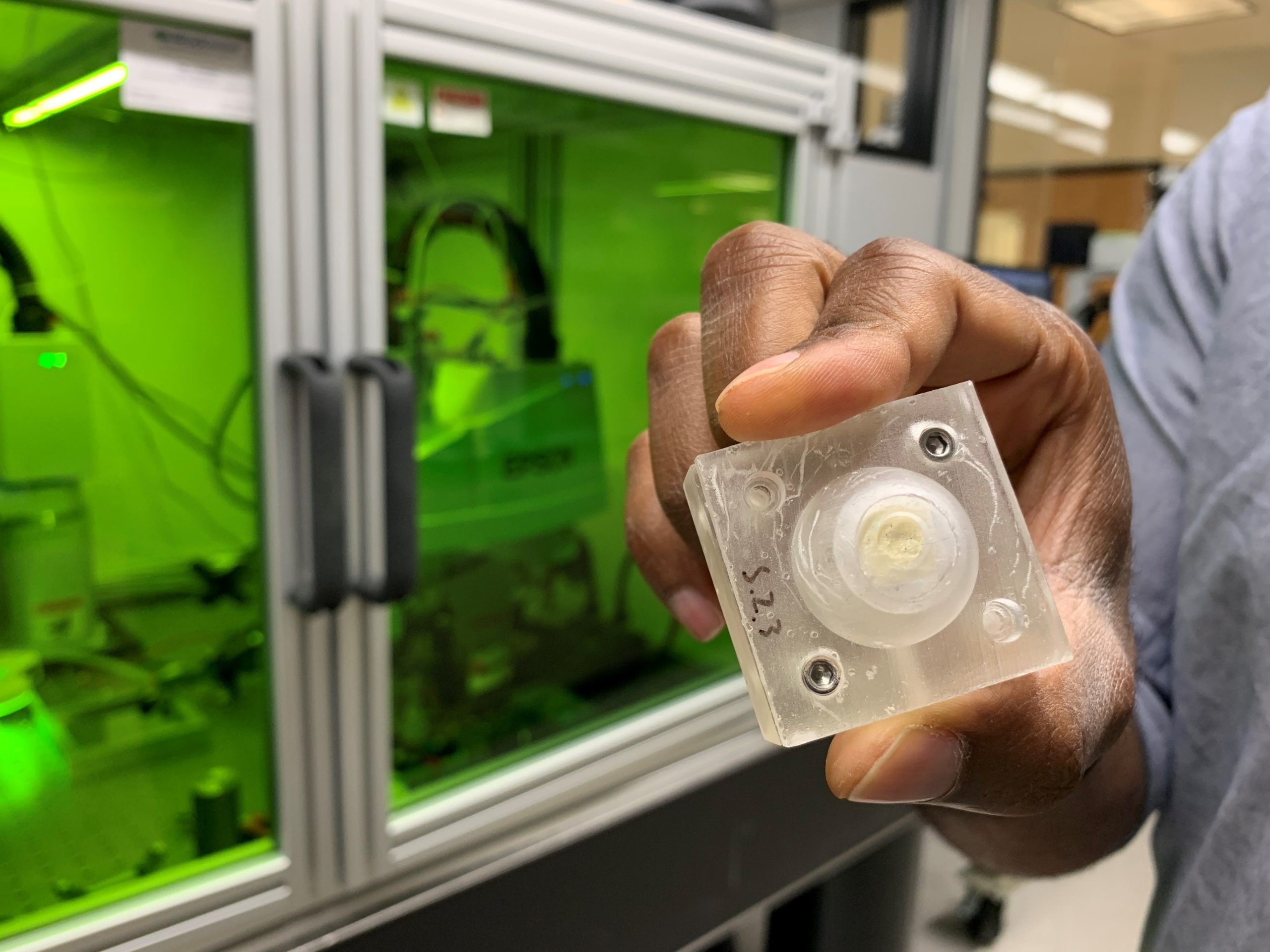 As the number of patients waiting for an organ donor has multiplied five-fold since 1991, three-dimensional (3D) bioprinting could be the response to worldwide organ shortages. Frank Alexander, PhD, a research scientist with The Geneva Foundation, is piloting technology to address critical tissue shortages for corneas, bringing science one step closer to creating transplant tissue and further advancing military medicine.

3D bioprinting is a rapidly evolving field that gives researchers the ability to combine cells, growth factors, and biomaterials to fabricate tissue constructs using layer-by-layer bioinks, allowing for greater physiological validity than traditional 2D methods. Dr. Alexander’s technique builds on existing direct-write print technology in order to build highly organized collagen scaffolds using electrospinning. Electrospinning is a core additive manufacturing technique using electric force to produce ultrafine fibers by positively charging a solution inside a syringe until it is forced out and solidifies to form a filament which is patterned on a negatively charged target.

The technology is part of a research initiative under the five-year USU-4DBio3: 4-Defense Biotechnology, Biomanufacturing, and Bioprinting Center, a collaboration launched in 2018 between The Geneva Foundation, the Uniformed Services University (USU), U.S. Naval Research Laboratory, and Walter Reed National Military Medical Center (WRNMMC).

The vision of the 4DBio3 program is to be a leading Department of Defense (DoD) resource for innovation, integration, and application of technologies. Dr. Alexander said the collaboration is unique because of “the breadth of expertise in military medicine.” He added, “Biomedical researchers from academia and public/private sectors can be leveraged for the warfighter. These austere 3D printing materials can be readily accessible in the field.”

With his background in electrical engineering, Dr. Alexander designed an electronic LabVIEW program to automate control of the print state and monitor the fibers in real-time. The team was able to provide further proof-of-concept through testing. The next step was to get the technology into the hands of military surgeons.

“The idea is to incorporate sensors into the tissue to be able to report to surgeons how they are doing, in real-time, during surgery,” said Dr. Alexander. Earlier this year, they took 3D printed tissue to WRNMMC. “We demonstrated a 3D prototype of a cornea made of collagen fibers and gel-like material for military surgeons to feel out with the goal to eventually build up 3D tissue that looks like an eye,” said Alexander. He is optimistic that with their input, future revisions will achieve better results in the future.

Dr. Alexander’s contributions to scientific research extend outside of this work. Recently, his involvement with the National Society of Black Engineers and 100 Black Men of America, a mentoring program for young Black students, gave him the opportunity to bring Black students from a local high school looking for a career in science, technology, engineering, and mathematics (STEM) to the 4DBio3 laboratory in Rockville, Maryland for an up-close experience. “It’s critically important for Black students to have mentors and role models in STEM careers and be exposed to STEM fields throughout their educational experience,” he said.

When asked what his proudest moment as a Geneva researcher has been so far, Dr. Alexander said, “Publishing the research was a major achievement. Two years ago, this was just an idea, and it has been extremely rewarding to see how much progress our team has made in a relatively short period of time. But equally, it an honor to serve as a mentor to young Black students in my community, and I look forward to continued impact and opportunity as this program develops.”