Evaluation of Role 2 (R2) Medical Resources in the Afghanistan Combat Theater: Past, Present and Future 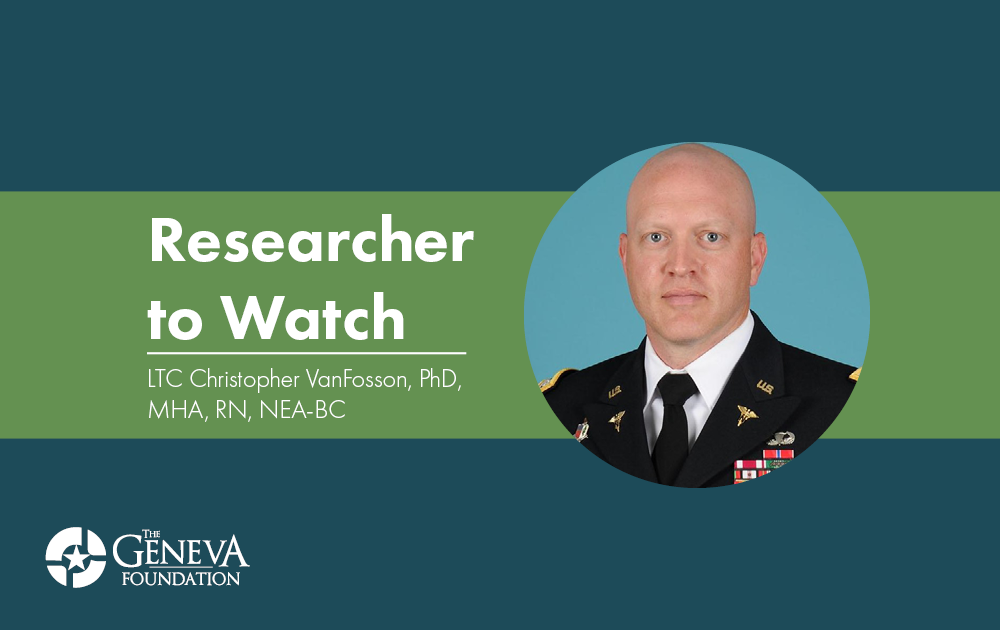 The military trauma system consists of three levels of care in the combat zone, with each level having increased resources and personnel than the previous level. Role 1 consists of prehospital care at point of injury and during transport. Role 2 forward surgical teams bridge the gap between wounding and definitive battlefield care by providing damage-control resuscitative and surgical care with the goal of rapid stabilization and transport to definitive care at Role 3 medical treatment facilities.

The Role 2 database [now, part of the Department of Defense Trauma Registry (DoDTR)] was developed in 2008 by the U.S. Joint Trauma System (JTS) to understand combat trauma epidemiology and related interventions at these facilities to guide training and optimal use of forward surgical capability in the future.

LTC Christopher VanFosson, PhD, MHA, RN, NEA-BC is the Chief of the Clinical Research Support Group at the U.S. Army Institute of Surgical Research (USAISR) and took over as the PI for this grant from COL (Ret.) Elizabeth Mann-Salinas, PhD, RN effective 01 Dec 2018.

Mann-Salinas et al. conducted several analyses as part of this grant, including a broad analysis of casualties treated by Role 2 FSTs in Afghanistan during Operation Enduring Freedom (OEF). Since taking over the project, LTC VanFosson and his team conducted a comprehensive inventory and description of current R2 pre-deployment training programs to create and implement an evidence-based program to optimize provider performance of combat casualty care. In a manuscript published in Military Medicine, authors concluded that “forward surgical team training and performance improvement metrics should focus on optimizing commonly performed operative procedures and non-operative interventions. Operative procedures that were commonly performed, and those associated with higher rates of morbidity and mortality, can set surgical benchmarks and outline training and skillsets needed by forward surgical teams.”

LTC VanFosson’s manuscript titled “Anatomic injury patterns in combat casualties treated by forward surgical teams” was selected as one of the Committee on Surgical Combat Casualty Care (CoSCCC) Journal Watch 4th quarter abstract selection in FY2020. This research team found that from injury patterns, military medical leaders can optimize forward surgical care in future environments, on a larger scale, and use less resources. Additionally, by describing the spectrum of injuries treated at Role 2 facilities in Afghanistan, Role 2 forward surgical teams can be prepared in the future with adequate training prior to deployment. In support of these findings, this same team conducted a survey-based assessment of pre-deployment training for US Army nurses and medics assigned to provide care at the point of injury through Role 2 forward surgical teams. Their findings demonstrated that most nurses and medics are satisfied with their pre-deployment training and recommended areas of focus for future pre-deployment training requirements.

“I truly appreciate the support that our Role 2 team has provided throughout this research effort,” said LTC VanFosson. “Our goal is to prepare clinicians for their deployed mission on the future battlefield and to minimize preventable combat deaths. As such, our findings inform military decision-makers as they shape patient care for the future battlefield. I cannot think of a better cause for military medical researchers!”

LTC VanFosson also is the Chair of the Headquarters, USAMRDC Institutional Review Board, a member of the Tri-Service Nursing Research Program (TSNRP) Strategic Advisory Council, and reviews for numerous professional journals.

VanFosson will transition to Brooke Army Medical Center in June 2021, where he will serve as the chief of the Center for Nursing Science and Clinical Inquiry. While there, his Geneva research team will complete their DoDTR analysis of forward surgical team care in Afghanistan. VanFosson also will continue to work as an associate investigator for another Geneva grant for the Deployed HEROES study slated to continue through 2024.