A Model of Excellence in Nursing Research Mentorship 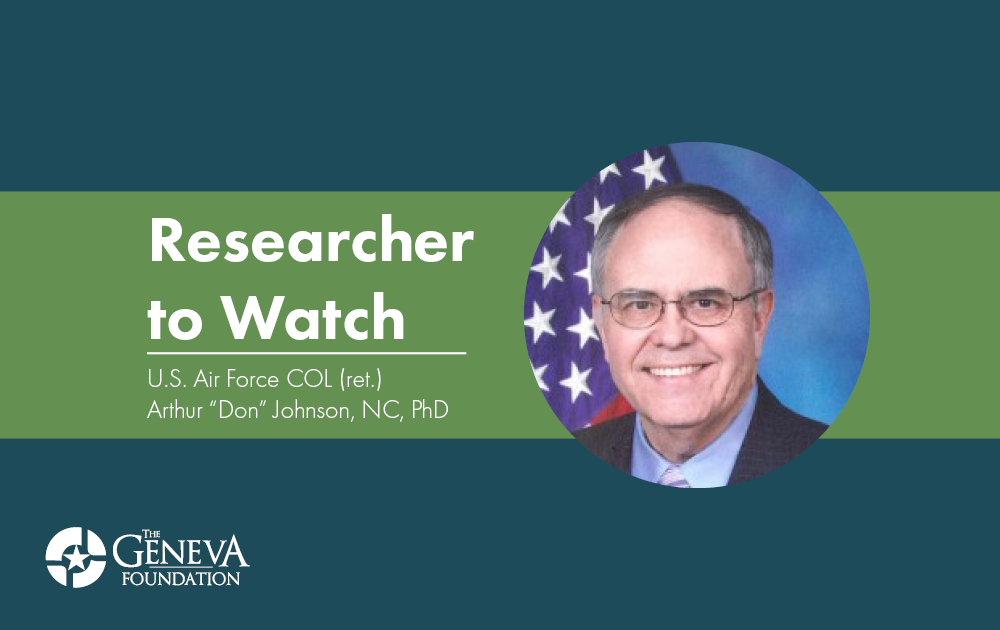 Dr. Johnson has served over 40 years as a respected nurse scientist and mentor with his military, civilian, and federal DoD service. He is a principal investigator on at least four Geneva-managed studies since 2005, including his current study focused on critical care research titled “Epinephrine Admininstration in a Pediatric Swine Normovolemic Model.”

He plays an integral role in displaying the importance of research as the basic foundation for evidence-based practice. In his award nomination, Dr. Johnson was described as a superb role model for both students and faculty as he continues the efforts to advance the science of anesthesia nursing. He is also a mentor and associate investigator on another Geneva-managed study led by LTC Y. John Yauger, PhD, CRNA titled “Effects of Pediatric Tibia Intraosseous Epinephrine Sequestration.”

As a scientific mentor, Dr. Johnson has published an impressive 250 peer-reviewed papers and abstracts aimed at asking scientific questions that matter for service members. He has published research on resuscitative medicine to examine the optimal routes of administration for epinephrine, vasopressin, albumin, amiodarone, venlafaxine, atropine, whole blood and hextend. He has also examined the effectiveness of resuscitative products the military has purchased such as ResQPOD, Quick Clot, Bleed Arrest, the HEET garment.

Dr. Johnson has taught and mentored over 450 military graduate students for over 17 years at USAGPAN and served as committee chair for over 55 graduate research projects. He is skilled at mentoring military nurses to advance their ability to conduct rigorous research and implement science into their practice

Since its founding in 1992, the TriService Nursing Research Program (TSNRP) has funded more than 375 grants resulting in research published in more than 90 peer-reviewed journals. The Program serves nursing professionals and all patients by funding research that advances nursing practice and technology. TSNRP was the creation of a group of Army, Navy, and Air Force nurses who believed a central agency would enable military nurses to conduct more effective research.