Unique Biomarkers Can Detect Lung Cancer When It’s Most Crucial 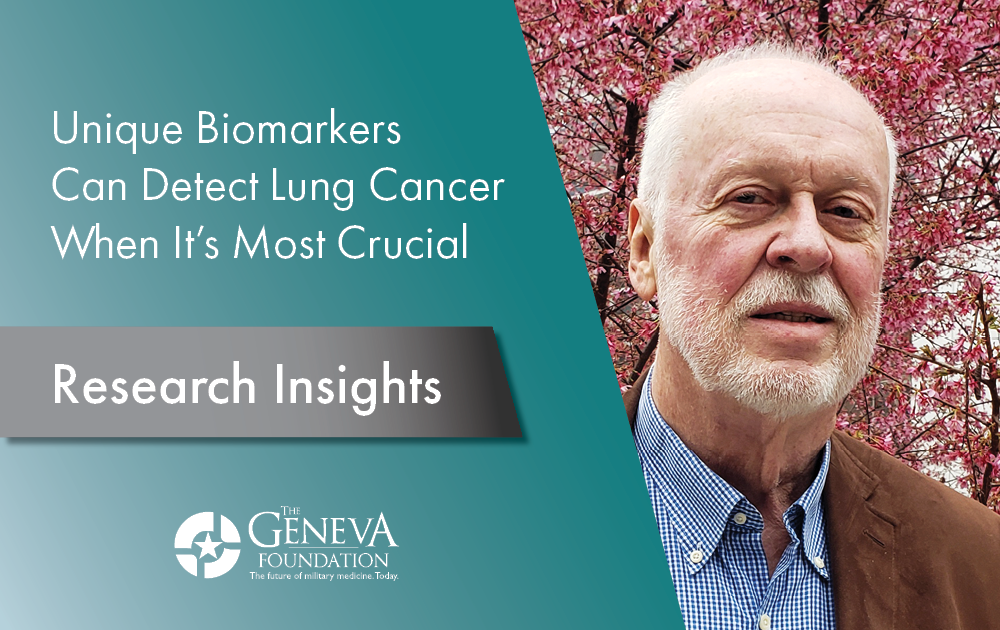 Dr. Curtis Harris and NCI partnered with Geneva to detect lung cancer in its early stages by improving diagnostic testing.

Imagine a world where doctors can predict how cancer will grow in a patient and are able to identify which therapies a patient’s cancer may or may not respond to? That world is no longer just a fantasy because researchers are learning more every day about biomarkers to detect cancer.

Biomarkers are molecules that indicate normal or abnormal processes taking place in a patient’s body and may be a sign of an underlying condition or disease. National Cancer Institute (NCI) Scientist and Geneva Principal Investigator Curtis C. Harris, MD aims to further understand how biomarkers can serve as tools for the early detection of lung cancer.

Dr. Harris is a Senior Investigator and the Head of the Molecular Genetics and Carcinogenesis Section and Chief of the Laboratory of Human Carcinogenesis at the Center for Cancer Research of NCI at the National Institutes of Health (NIH). His research has spanned more than half a century and has made significant breakthroughs in cancer research.

Lung cancer is the number one cause of cancer-related deaths every year in the world and kills approximately 160,000 people—mainly because it goes undetected until it spreads to other parts of the body. In military veterans, the mortality rate is twice that of the civilian population. Because of the prevalence and risk factors, Dr. Harris has set out to validate the usefulness of previously discovered urinary biomarkers among military personnel at high risk for lung cancer. His focus has been on detecting the disease at an early stage in hopes of improving a very bleak prognosis. His discoveries could ultimately help mitigate existing risk, and improve diagnostic testing and prognostic lung cancer classifiers within the military and other at-risk populations.

Comprehensive biomarker testing is used among diagnosed advanced-stage lung cancer patients to determine the presence of particular mutations or of a particular protein. It is the first step in precision medicine—ensuring that a patient gets matched to the right treatment at the right time, based on the patient’s biomarker status.

The Validation of Metabolomic, Diagnostic, and Prognostic Classifiers of Lung Cancer study lead by Dr. Harris, in collaboration with Geneva, the Department of Defense (DoD) and the Detection of Early Lung Cancer among Military Personnel (DECAMP-1), set out to validate urinary biomarkers to assess whether these specimens can be used to predict lung cancer risk.

DECAMP, which began in 2013, is a multidisciplinary and translational research program intended to improve early detection of lung cancer through non-invasive biomarkers and improved screening. Study sites include VA hospitals, military treatment facilities, and academic hospitals. The DECAMP 1 and 2 studies are funded through the DoD Lung Cancer Research Program, Johnson and Johnson Inc., and Novartis Biomedical Research Institutes, and conducted by Boston University in collaboration with the American College of Radiology.

Statistics show that only 15% of all lung cancer cases are diagnosed locally before the cancer spreads to other parts of the body, highlighting the importance of a diagnostic tool for early diagnosis. “The use of a urinary test can be better than subjecting patients to invasive assessments that may cause further complications,” said Dr. Harris. “Additionally, urinary tests are less expensive than other medical diagnostic exams, the samples are abundant which allows for resampling, and has proven conductive to biomarker discovery.”

The goal of this program is to better understand the specific military risk of lung cancer and military exposures as compared to the general population. Military populations were evaluated from the DECAMP-1 cohort which was comprised of patients who had lung cancer nodules already detected by a LDCT and evaluated by other diagnostic methods. This study also examined a third group of civilian participants from the Southern Community Cohort Study (SCCS), comprised mainly of African American (AA) subjects. This population is important since the AA population is growing within the military and suffers from a higher incidence of lung cancer.

This five-year study concluded near the end of 2019 and identified clinically relevant biomarkers to improve the accurate diagnosis of early state lung cancer. “Because different populations were used for this study, the outcomes will directly benefit active and retired military members,” said Dr. Harris. “Additionally, these non-invasive urinary tests can easily be implemented into the clinic setting.”

In his spare time, Dr. Harris is an author and has co-authored a spy novel titled High Hand under the pseudonym Curtis J. James.

Geneva is honored and proud to partner Dr. Harris to advance cancer research and we look forward to a world where we can treat, control, and cure all cancers.

To learn more about how you can help fuel innovation in cancer research and beyond, visit our website at genevaUSA.org.